User Experience & Application Design
Project Overview
The process for designing a solution for complicated and unorganized carpooling. This project has gone through many iterations from prototype being used on a daily basis, developed into an iOS application, and then further designed.

As a member of the Crew Team in college we had to carpool to-and-from the local lake for practice. Getting a variable set of college students to the lake on a daily basis became a complex and frustrating task due to these constraints:

Groups need a way to easily organize carpooling events because there are a lot of factors can play into getting a group of people from one place to another effectively. 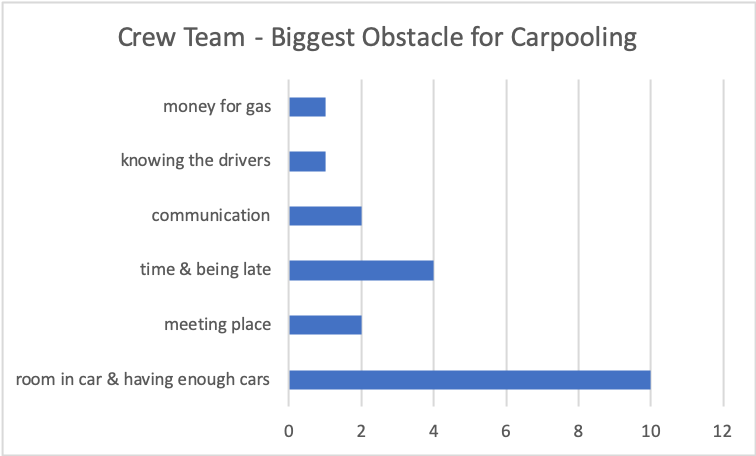 "I wish I didn't feel as obligated to drive other people to practice when I have class directly beforehand."

I don't always know if everyone is accounted for and has a ride so it is hard to know when leave the meeting place.

Although many said they were satisfied with the current organization, they did identify areas that could be improved when organizing the carpools. The majority found that timing and being late were the most common area for frustration. Someone also provided the insight that it is difficult not knowing the driver that you are getting into the car with.

How can we solve this now?

I wanted to tackle the issue with the organization as quickly as possible so I created a Google Spreadsheet that could be shared with the entire team. I formatted it to visualize the drivers who would be available for each practice and the capacity of the cars. 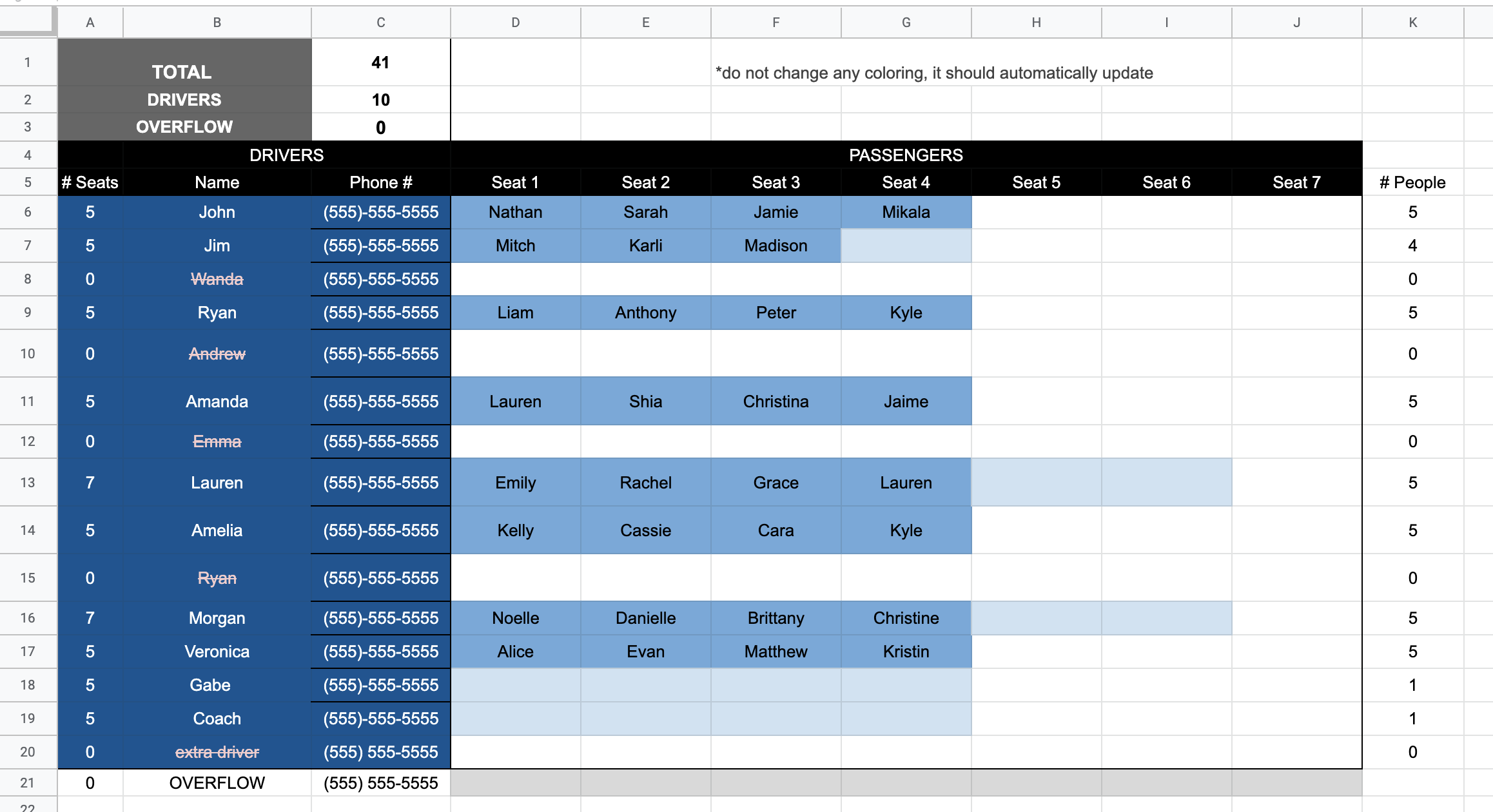 This solution helped us as a team to be more efficient in organizing getting everyone to practice each day. People were able to know prior to practice who would be driving and in each car. This allowed the cars to communicate with each other prior to practice in case of any timing or location changes. It also gave accountability for the right people to be attending the practice and lowered the risk of leaving people behind. The overflow row allowed for addressing times when there were not enough seats for people who needed rides. The need of an extra driver could be identified early.

As a senior in Computer Science at Penn State I had the opportunity to take an application development class and created an iOS application to address organizing carpooling. The result was a mid fidelity iOS application created using Swift. It had functionality for users to create groups, organize carpools, and sign up as both drivers and passengers.

Starting from the ground up

There was a hiatus on this project as I graduated college and started my full time job. Revisiting the project a few years later I wanted to start from the beginning of the design process with research.

I wanted to learn about how people currently tackle the task of organizing a carpool. I explored the types of situations that prompt carpooling for different audiences. I looked into what challenges they face, and concerns they have when organizing a carpool for themselves or others.

Most of the people interviewed organize large carpools by creating large group chats with everyone. The risks of which were losing answers in the growing conversation, and forcing someone to take lead and parse the messages to ensure everyone who needs a ride has one. There was no sense of confirmation or accountability.

All of the parents interviewed have a carpooling system set up to share the responsibilities of picking up and dropping off their children at their after school activities with other parents and families near them. The concerns they raised were different from the other population as they were managing carpools for individuals other than themselves. Safety was a major concern for them, and they wanted confirmation that the carpool was successful and their child home. Another major factor to consider when transporting kids is the car seats available in the car. That is a factor that I had not considered and one that I did not see addressed in the competitive research.

What's already out there?

There are ride share apps such as Uber, Lyft, and Waze Carpool that help you find a ride in your area. Apps that help organize custom carpools with people you know are limited and are primarily targeted towards families with kids.

From the user interviews, competitive research, and personal experience two user personas were identified as being distinct primary users of this application.

Want to effectively organize carpools for large groups to avoid frustration and confusion.

Not having great communication with other parents. Risk of not getting children where they need to be safely.

As I share the task of picking up and dropping off my children at their events I want to know that my kids will get where they need to be safely and timely.

This paper prototype was the developed with the purpose of getting ideas down on paper and perform usability tests. 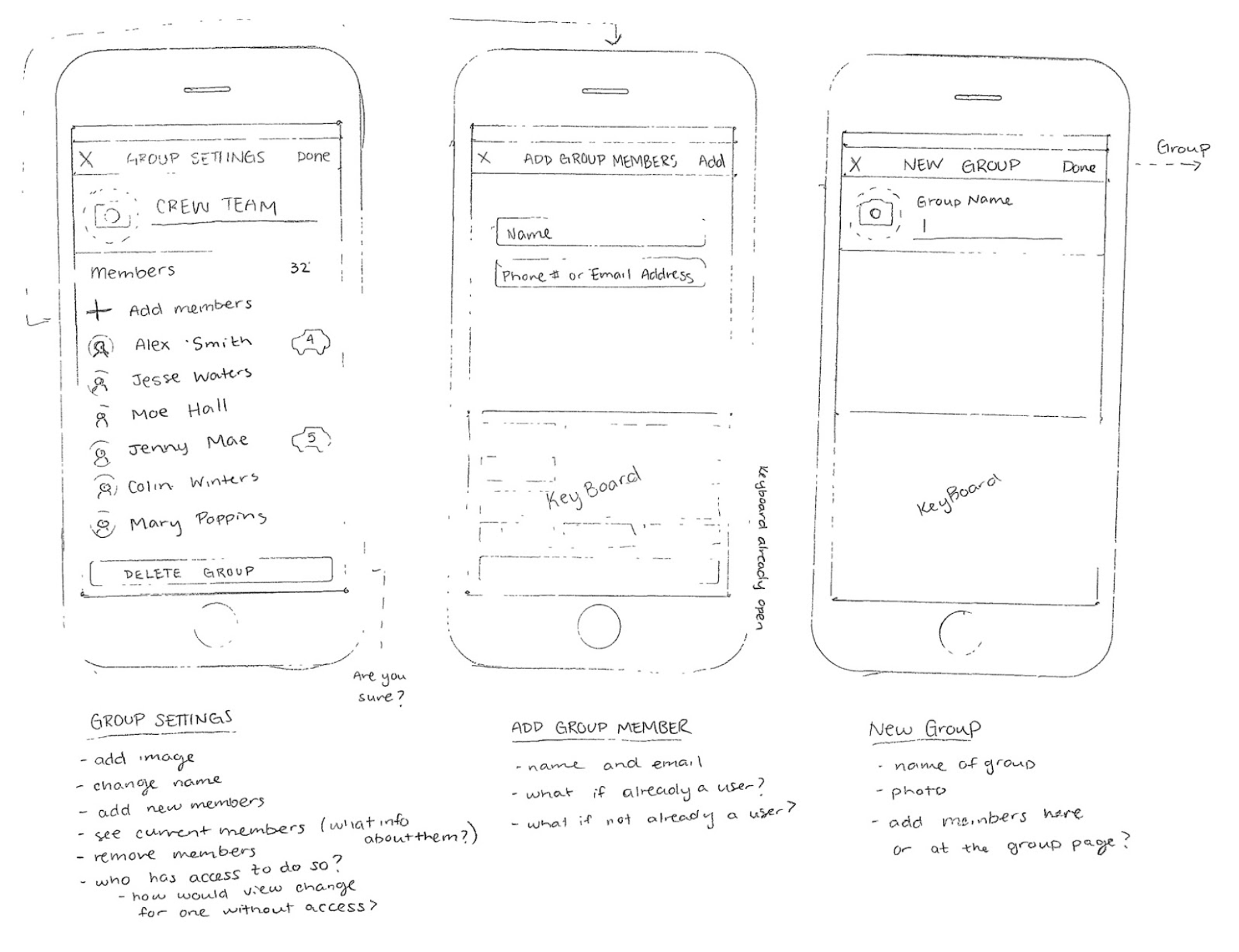 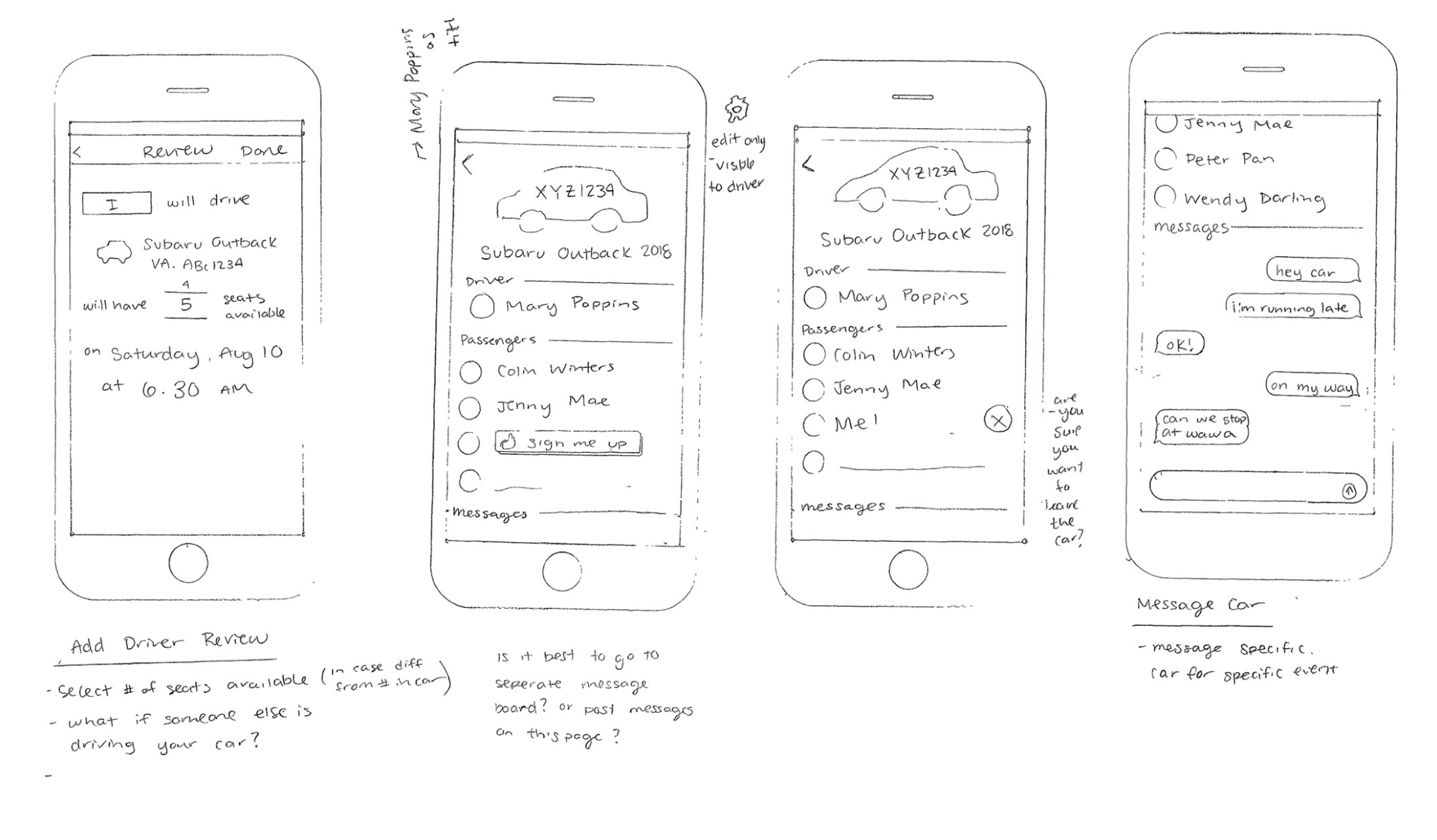 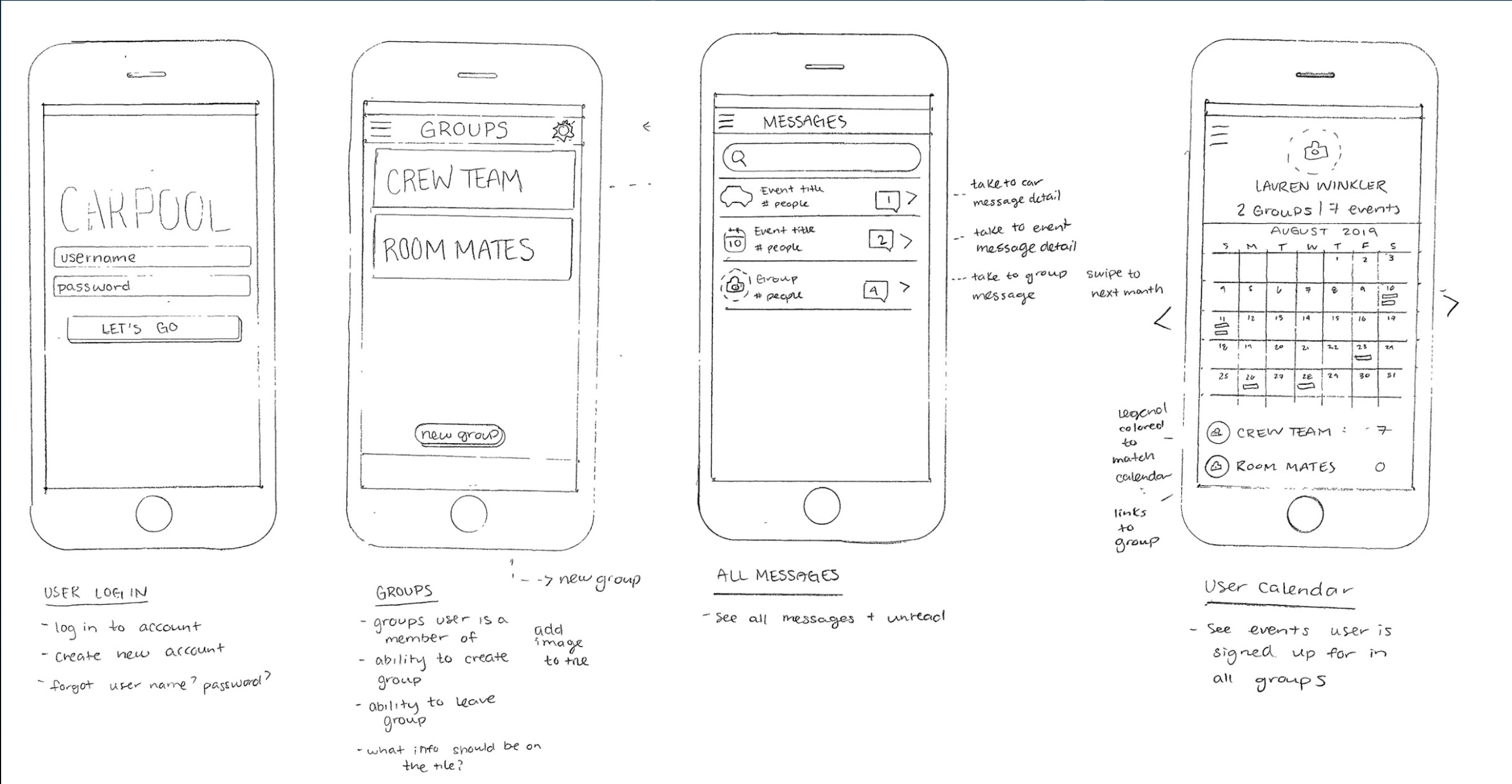 Currently working on some low fidelity prototyping for this application that can be used to conduct user testing. Stay tuned to see where the project goes from here.

Want to work together?

If you like what you see and want to work together, get in touch!